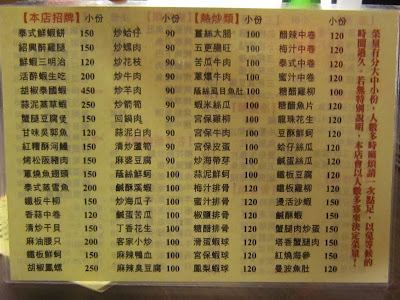 The other night my husband Dan and I played Russian Roulette.  Not with our lives of course, but with our stomachs.  We were feeling a little adventurous and wanted to try out one of the restaurants we passed on the street.  It was a little scary but exciting too.  We decided that we'd just go into the first place that looked good and busy (on the assumption that any place that's busy around here has to be good - Taiwanese really know good food!)

So we found this little restaurant on the corner of a street down an alley.  It had red lanterns hanging outside, which Dan is convinced always means food (I'm not so sure about this).  I wish I would have been able to get a picture of the place, but my camera died half-way through our meal.  What a tragedy!

Anyways, we sat down at this big round wooden table.  There was a stand in the middle with soup spoons, chopsticks, soy sauce, some chilies, and little napkins (pretty standard for restaurants around here).  We got this menu that was all Chinese characters.  No pictures.  No one spoke English.  So we decided to play Russian Roulette and just point to a few things.  Very nerve-wracking! 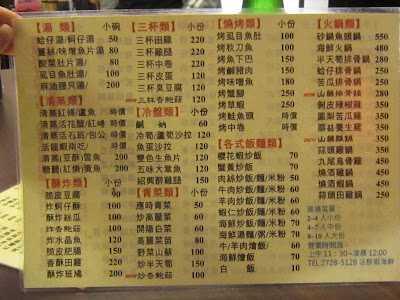 Our first dish came out, and we felt pretty lucky.  It was a fried rice with little dried shrimp.  It was actually quite delicious!  The shrimp was strange at first, it kind of has a texture like potato chips but with an unmistakable seafood taste to it.  These little guys pack a lot of flavor! 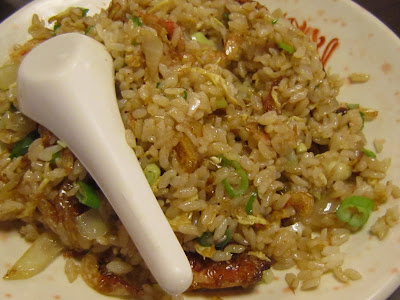 The next dish we got was a definite winner!  It was a crispy fried pork (probably pork chop or something around that area).  It was in this amazing stir-fry of vegetables and a lot of garlic and cilantro.  Extremely flavorful.  I can still taste the garlic in my mouth :)  The pork did have bones in it though.  This is hard for us to get used to.  It's so unusual in the US to meat with bones still attached.  We don't have the right skills so it's awkward for us to chew around bones and spit them back out.  I wonder if we'll ever get used to this. 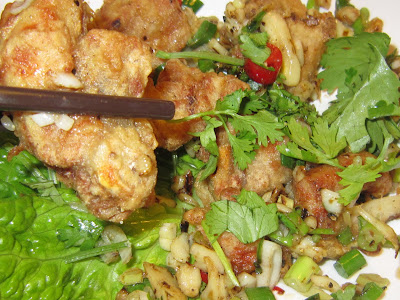 Our final dish was not such a hit.  Unfortunately my camera died right after taking the above picture so I didn't get anything from our last dish.  It came out in a big steaming metal cauldron, and looked like a really weird tofu dish.  It was kind of gelatenous sauce with pieces of tofu and little rubbery mussels, with some crushed peanuts on top.  Not that appetizing.

Overall I think we were really lucky with this dinner.  A few nights later we were eating with a Taiwanese friend and I showed her the picture of the menu and she started laughing at us.  Apparently there were some pretty crazy things on the menu (frog, pig liver, tripe, etc) so we got pretty lucky.  I don't know if we'll be trying this game again any time soon.  It was a great experience though!
Posted by Nova Walsh
Email ThisBlogThis!Share to TwitterShare to FacebookShare to Pinterest

Just found your blog, and I'm enjoying reading about all your adventures and experiences. I love rice and that dish looks so yummy!

It was quite an advanture, ha! Maybe I should follow your order next time we go out~ It's more fun! :D

I had to throw out my lunch at work because it went bad...I am still at work and I saw your blog...starving...
-Li

@Monet - I'm glad you found my blog and are enjoying it. Keep reading! Thanks for the comment!

@Connie - It was definitely fun :) I'm not sure we should do it again though. I'm an adventurous eater and all but some of the stuff on the menu sounded pretty bad...

@Li - that's a sad story! Throwing out lunch is never fun :( Sorry to make you hungrier :)

Quote of the Week

Cooking is like love. It should be entered into with abandon or not at all. – Harriet Van Horne, Vogue (1956)

Nova Walsh
Nova is a chef, author, and traveler, who is on a mission to find adventure, friends, and the secrets to a happy life.